As Federal Reserve (Fed) officials continue to emphasize the Fed’s commitment towards restoring price stability, the dollar marches ever higher. Markets are currently pricing in another 75-basis point rate hike at the November 2 Fed meeting as calls for the Fed to halt its aggressive campaign are mounting. Worries persist that tightening financial conditions, underpinned by a stronger dollar, will lead to deeper cracks within the global financial system.

Officials at the recent United Nations Conference on Trade and Development (UNCTAD) offered its views on Fed policy, stressing that it is “hurting the most vulnerable, especially developing countries,” and it “risks tipping the world into a global recession.” A wider range of informed critics also view the Fed’s assertive stance as unabating until something “breaks,” and point to the bond-related blowup in the U.K. and even the issues faced by Credit Suisse as examples of pockets of vulnerability that could be magnified more perilously as monetary policy becomes increasingly restrictive.

In markets that are focused on what can go wrong when monetary policy moves into restrictive territory, as it is now with global central banks raising interest rates to curtail stubbornly high inflation, the health of the banking system is always a top concern. Memories of 2008-2009 are still vivid even though global banks, overall, are in much healthier shape due to stringent regulations put in place following the crisis.

Credit Suisse's financial and leadership problems have been in the headlines as it struggles to convince investors that its balance sheet remains strong and liquid. The price of the bank's credit default swaps (insurance that the holder will be paid if there is a bond default) has been climbing. To counter investor concerns, the bank announced a repurchase plan to buy $3.03 billion of debt securities. In addition, a major structural re-organization is in the planning stages that will involve sales of assets and spinning off parts of the international business.

Comparisons with the now-infamous “Lehman” moment have been rife in the press, but analysts stress that the bank is in much stronger shape financially than when Lehman Brothers declared bankruptcy in September 2008.

Still, when clients are pulling away out of concern for Credit Suisse's financial stability, as recent reports have suggested, it can exacerbate fears that the bank is on the brink of insolvency, although by all accounts Credit Suisse remains in good financial condition.

Where there is legitimate concern, however, is that amid a more challenging market backdrop, the firm will have a difficult job raising capital at attractive rates.

Ramifications of the coordinated global move higher in interest rates and that currency is acting as a pressure release valve, have been felt nowhere more strongly than the United Kingdom (U.K.). The British pound had been weakening for some time amid a backdrop of dollar strength and a poor economic outlook as the U.K. has been wracked by rising energy costs. A stimulus packed government ‘mini budget’ announcement that included significant unfunded tax cuts sent sterling spiraling to an all-time low of $1.035 per pound, see Figure 1, as currency markets panicked about the U.K.’s rising current account deficit. 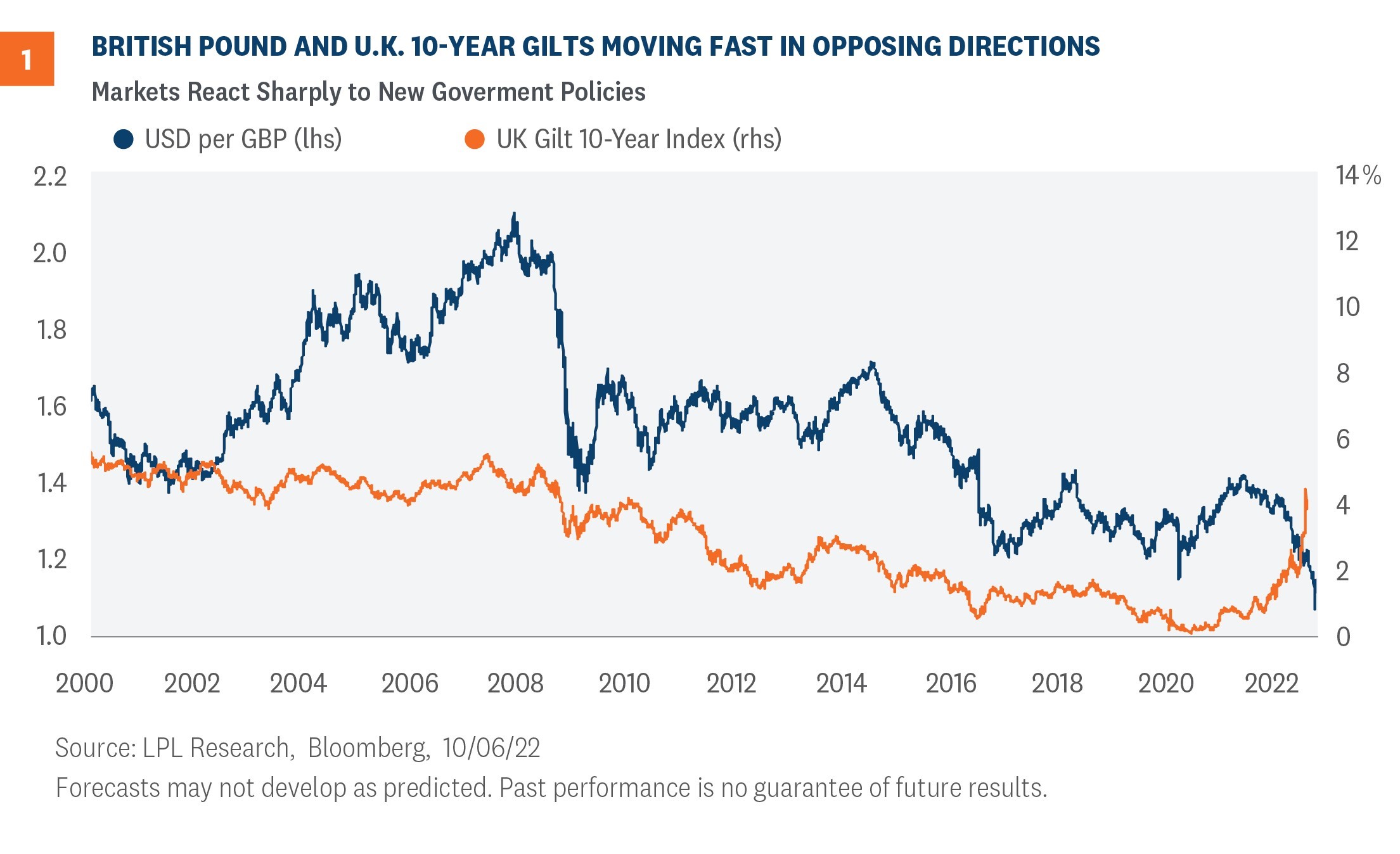 BANK OF ENGLAND FORCED TO STEP IN TO SAVE PENSION FUNDS

This incoherence of policy also led to highly volatile moves in yields on the U.K.’s government debt, or gilts as they are known locally, with the yield on the 10-year gilt increasing 1% in just three days to its highest level since 2008, see Figure 1 again. This in turn almost caused a meltdown in the U.K financial system. Many pension funds in the U.K operate Liability Driven Investment (LDI) programs whereby they use derivatives to gain leveraged exposure to, supposedly safe, gilts.

This left pension funds susceptible to rapid moves higher in gilt yields that almost led to a “doom selling” scenario where pension funds would be forced to liquidate gilts to meet margin calls, further forcing gilt yields up and triggering more margin calls. With multiple pension funds hours from collapse, the BoE was forced to step in and promise to purchase up to GBP 65 billion ($73 billion) of long-dated gilts to stabilize markets. Yields declined after the BoE announcement (and the U.K. government backtracking on some of the tax cuts) but have been edging up again in the past few days.

While Fed Chairman Jerome Powell has acknowledged that the pace of interest rate hikes could cause “pain”, at this point, there is no indication that the Fed is prepared to slow down its mission to restore price stability. Powell has repeated, in what has become his mantra, that without price stability we cannot have a strong economy or a strong labor market.

Investors are concerned that restrictive monetary policy, that is, tighter financial conditions, could lead to the kind of financial accident that dries up liquidity and delivers more harm to the global economy.

As the Fed embarks on a $95 billion per month “Quantitative Tightening (QT)” schedule in an attempt to unwind its nearly $8.9 trillion balance sheet, conditions will tighten further.

Lael Brainard, the Federal Reserve Vice-Chair, commented in a speech at the end of

September that “as monetary policy tightens globally to combat high inflation, it is important to consider how cross-border spillovers and spillbacks might interact with financial vulnerabilities,” and that the Fed remains “attentive” to these vulnerabilities.

Markets have become more volatile as “uncertainty” intensifies. Unfortunately, that the Fed has become more “attentive” does little to assuage investor concerns as to whether the Federal Reserve has a profound understanding of the ramifications of its policies beyond just fighting inflation.

Market participants now wait to hear from corporations as the third quarter earnings season begins. There should be considerably more understandable clarity from what corporate leaders tell us about the economic and financial environment than what Fed officials are able to offer. If interest rates rise at the current pace though, pockets of vulnerabilities could continue to deepen.

This material is for general information only and is not intended to provide specific advice or recommendations for any individual. There is no assurance that the views or strategies discussed are suitable for all investors or will yield positive outcomes. Investing involves risks including possible loss of principal. Any economic forecasts set forth may not develop as predicted and are subject to change.

References to markets, asset classes, and sectors are generally regarding the corresponding market index. Indexes are unmanaged statistical composites and cannot be invested into directly. Index performance is not indicative of the performance of any investment and does not reflect fees, expenses, or sales charges. All performance referenced is historical and is no guarantee of future results.

Any company names noted herein are for educational purposes only and not an indication of trading intent or a solicitation of their products or services. LPL Financial doesn’t provide research on individual equities.

All information is believed to be from reliable sources; however, LPL Financial makes no representation as to its completeness or accuracy.

The Standard & Poor’s 500 Index (S&P500) is a capitalization-weighted index of 500 stocks designed to measure performance of the broad domestic economy through changes in the aggregate market value of 500 stocks representing all major industries.

The PE ratio (price-to-earnings ratio) is a measure of the price paid for a share relative to the annual net income or profit earned by the firm per share. It is a financial ratio used for valuation: a higher PE ratio means that investors are paying more for each unit of net income, so the stock is more expensive compared to one with a lower PE ratio.

Earnings per share (EPS) is the portion of a company’s profit allocated to each outstanding share of common stock. EPS serves as an indicator of a company’s profitability. Earnings per share is generally considered to be the single most important variable in determining a share’s price. It is also a major component used to calculate the price-to-earnings valuation ratio.

All index data from FactSet.

This research material has been prepared by LPL Financial LLC.

For a list of descriptions of the indexes referenced in this publication, please visit our website at lplresearch.com/definitions.